Fire in the Hole

A steady rain fell loudly on our tent all night during the last moments of August 2014. By early morning on September 1st, our plans to rise at o' dark thirty and drive from Apgar Campground to Logan Pass to capture a sunrise were threatening to be overpowered by the desire to stay warm and dry in the tent. Most of my best shots are complete surprises related to spur of the moment decisions. Often when I plan a shoot, I am disappointed in the results. My wife and I pushed through the comfort of the tent and got up at 4ish to hit the road. As we drove up the engineering marvel of construction that is Going-to-the-Sun Road, we began to climb into the magical world of the clouds that usually stays above the ground we walk on. The clouds and fog became so dense that we could hardly make out the center line of the road. If you've experienced this road, you know that the road is not a full two lanes wide. In many places it is a vertical wall above and a precipitous drop below. The only thing separating you from the abyss is a wood guard rail. We inched along in the dark fog hoping to keep the rubber side down and watching carefully for any hint of on-coming headlights. It definitely began to appear as if we would not get to experience a glorious Glacier sunrise. We pushed on though and soon enough we safely reached the Logan Pass parking lot. Not another human soul was to be seen as I drove to the east side of the lot. The fog was racing over the pass like a herd of sheep being pushed out of a corral by a sheep dog. 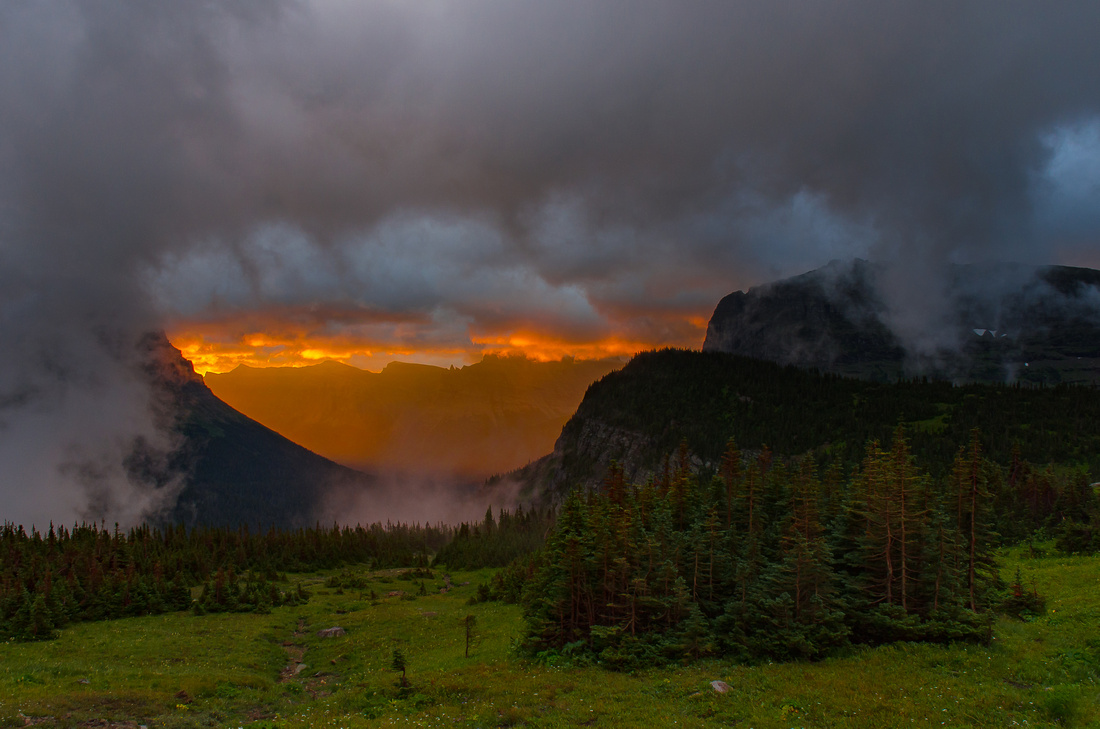 I noticed, as the dark was giving way to the dawn's early light, that small holes in the cloud cover occasionally passed overhead. I began to anticipate that one of these windows to the stars might, just might, offer a view to the east and offer some brief spot of color. I set the camera up on the tripod and pulled my hood up as protection from the wind driven water vapor that felt much colder than the thermometer may have suggested. Then it happened. One of those open patches blew with incredible speed from the west, passed overhead and then a breathtaking burst of color opened up to the east. A shaft of sunlight shot up the St Mary Valley and illuminated the clouds in vivid orange. Wisps of fog lifted off the trees and rose to dance with the peaks. I rapidly pushed the shutter release as I panned the camera from side to side in an attempt to find the best composition. Then, as quickly as it opened, the clouds once again filled in and enveloped the landscape in it's cold, wet blanket. I grabbed my camera, folded up my tripod and walked quickly back to the vehicle to warm up. As I approached the truck, my wife's eyes met mine in an unspoken "did you see that?".  There is something powerful about experiencing such majestic natural beauty with your soulmate. I am grateful to have captured this image, but in truth, I don't need the picture to remember it. The image is forever in my mind.