Light and Shadows on Black Butte

Light, in all its beautiful forms, is what photographers seek to capture. We will chase it through valleys and over mountain tops. We are willing to wait for hours until the light is just right. The best light bookends the day as the earth’s primary source of light both greets and bids farewell to a day spend basking in its glorious light. Last July, I decided to capture a series of images documenting my day chasing light around Black Butte in the Gravelly Mountain Range. The images in this album represent roughly 24 hours from midday one day, to midday the next. As these images show, clouds, as long as they let enough light in, are a friend to photographers. Join me as I wonder around our campsite and capture moments of a day in the life of Black Butte.

All day long, clouds were streaking overhead. Rolling hills were covered in wildflowers representing colors that artists have attempted to replicate over the ages. With names like Old Man of the Mountain, Monument Plant, Sky Pilot, Forget-Me-Not, and Indian Paintbrush, these flowers are as unforgettable as their names suggest. As the Sun continued its arc across Montana’s famous Big Sky, shadows moved slowly like the hands of a clock. At mid-day, they are small and the light can be harsh, but as our source of light and warmth approaches the horizon, thats when the magic happens. Shadows stretch like a fox waking from its nap. They get longer as gilded light begins to pour over the landscape. The darkness begins to envelop the landscape until just the highest places reflect the light. Eventually almost all of the light is gone, but the show is not over! At night, a host of the Sun’s very distant relatives join together in the darkness to form fantastic shapes in the night sky. Earth bound dreamers have stared into tho night sky for millennia, playing connect-the-dots on a huge scale. Gases and dust left over from the massive explosions of dying stars join with an impressive array of active stars as the spiral off into the universe. Darkness can be scary in bear country, but my sense of wonderment at what I was beholding was stronger than my fear. But wait, there’s more! A few hours later, our warm sphere is lighting up the sky again. This time the show starts on the tops of the mountains. Sunlight kisses the peaks good morning and then its glorious light chases the shadows down the mountain and across the meadows of wildflowers. I spent another hour or so in rapt attention as I witnessed the dramatic performance that we call sunrise. Then, it was back to bed for a little while to recapture the sleep that all that light chasing caused me to lose! Time to pack up and head home, but not after one last look over my shoulder at my new friend, Black Butte. We’ll be back. In the meantime, enjoy this slide show of images I captured in a 24 hour period. 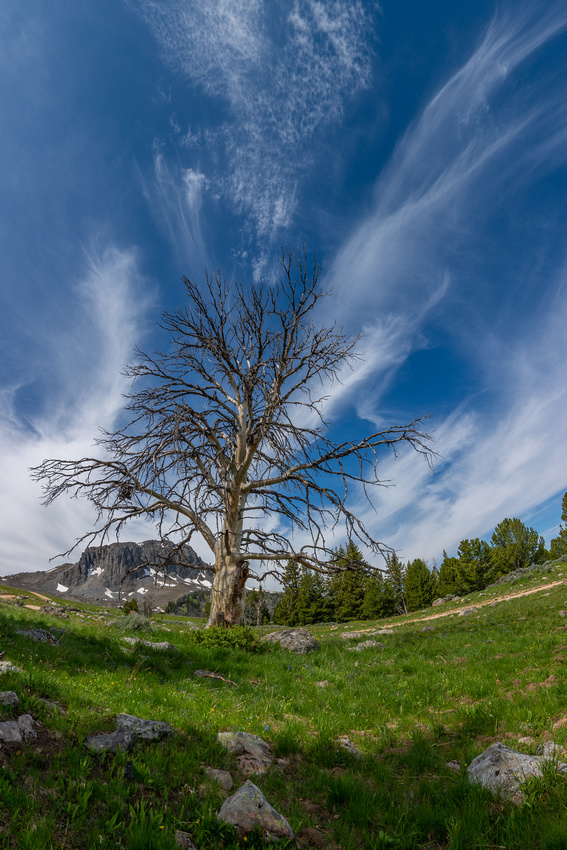